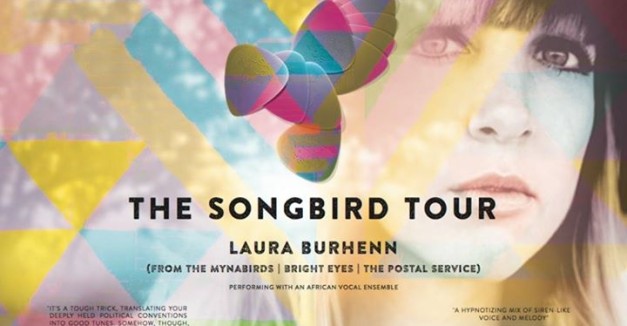 The Mynabirds are a collective of musicians fronted by singer-songwriter Laura Burhenn. Founded in 2009 following the split of her previous DC band, Georgie James, the Mynabirds are currently based in Omaha, Nebraska. Their debut album, “What We Lose in the Fire We Gain in the Flood“, was produced by Richard Swift and released to critical acclaim by Saddle Creek in April of 2010.

The Mynabirds supported their debut LP with more than a year of busy touring alongside bands-become-friends, including Bright Eyes, David Bazan and Crooked Fingers. In December of 2010, they released “All I Want is Truth (for Xmas)“, a limited edition 7″ on Saddle Creek, which featured an original (anti-commercialism) holiday song and a cover of the Zombies’ “This Will Be Our Year”.

At the end of 2011 following a year on the road as a member of Bright Eyes’ touring band, Laura headed back into the studio with Richard Swift to start on something new. Their sophomore album, GENERALS, will be released on Saddle Creek on June 5, 2012. A limited edition hand-silkscreened and hand-numbered 7″ will be available at participating independent record shops on Record Store Day (April 21, 2012). The band will be touring the US and beyond beginning in June.