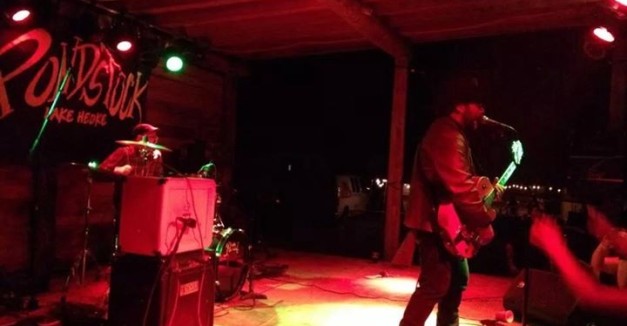 Let there be ROCK
In our house growing up there was no AM radio played. There was no classic country. There were no “oldies.” I was raised on old AC/DC. It was Black Sabbath and Lynard Skynard. It was Nazareth and Jimi Hendrix. It was Led Zeppelin and Blackfoot.

I can still remember hardly being old enough to walk and seeing my dad standing up, leaning against this big, old homemade wooden entertainment center we had. He would chain smoke Marlboro Reds and slam down Budweiser a case at a time. He’d have the beat up stereo equipment cranked to distortion until the early morning hours. This is the foundation and the attitude THE MOTHERFUCK’N SAINTS was built on.

I’m lucky I was a misfit.
I hated being a kid. I hated school. I hated church. I hated most everyone around me. I went to a one-room schoolhouse. The teacher was a bible thumping hyper-conservative that was convinced that heavy metal was the work of Satan (if it were only that interesting, huh)? I remember her bringing in a Time magazine with pictures of Guns’N’Roses and Motley Crew smoking & drinking and flipping off the camera. This self-righteous whore said this was “pure sin” and “smut”. I was in like 1st or 2nd grade wondering what the fuck the problem was?

I hated high school. I secretly wished I was normal, while on the outside reacting with anger and defiance to almost everyone and everything. I hated the students who conformed and obeyed and cared about succeeding. I hated the kids who drank and smoked to fit in. I hated the girls who wouldn’t pay attention to me. I hated the music the lame-ass males listened to and the bullshit sports team regalia they wore.

That is probably why bands like the Dead Kennedys and Minor Threat spoke to me so profoundly (and probably saved me from putting a slug through my skull). These bands spoke about the trite, shallow attitude that dominates youth culture, and then follows people into their cliché adult life. The consumerism, the drugs, the mindlessness, the apathy. All things that where apart of these phony, stupid people’s lives were attacked – and I LOVED IT. I loved the confrontational attitude that real punk rock is known for.

I was a child of the 90’s. Lucky me.
The economy was booming. The U.S. was not at war overseas. Bill Clinton was president. The Internet was “connecting” the whole world. 9/11 was something my generation couldn’t have even comprehended. Everyone was so fuck’n happy with their perfect little lives.

This apathetical attitude was translated in the shit music of the late 90’s. Kids my age at the time thought fuck’n Blink 182, with all their nauseating fluff, was punk rock. They thought that Korn with their putrid rap/rock sound and self-absorbed crybaby lyrics, was metal. Slipknot, with all their contrived aggression, became the standard for all the kids who thought they were “hardcore”. And…. Fred Durst and Kid Rock made it cool to be a “rock star” again (Note: FUCK them both). This all fit in well in the glutinous, bloated climate that dominated that time period and you couldn’t escape it. Every little cunt could go to Hot Topic and spend away and get outfitted in the latest rock uniform (thanks to their parents money, of course).

I was surrounded by weak, heartless fucks who where enamored with all the nonsense that our media and culture feed them. They soaked it up like stupid little sponges. I felt like I was drowning in a sea of senseless shit.

Of course, Lincoln, Nebraska was rampant with pussy bubble gum punk and ridiculous rap metal in the late 90’s and early 2000’s. At one point, we did not play for A YEAR AND A HALF in our own hometown.

First concert at age 10. Game over.
I told this story before, but at age 10 my mom and dad took me and my brother Ben to a Metallica concert…and there was no going back. I know… Metallica has long been the bench mark of all that is wrong with contemporary rock music and have been irrelevant for well over 20 years, but the atmosphere of the wasteland that is a ROCK SHOW was the fist time I felt like I was HOME; The smell of sweat, booze, weed, and hormones. The slutty dressed woman, who probably have all since died from STDs or meth addiction. The acne-riddled youth who had NOTHING in life but would give ANYTHING to never leave the safe place which is the arena floor. That moment when the lights went down… it makes the hair stand on the back of my neck thinking about it.

If you’re going to speak, SAY SOMETHING.
As much as the sound of the band was shaped by the music Ben and I grew up listing to, the lyrics came from a different place. As I stated above, the contempt I felt for the environment around me was a big influence on my writing. However, equally as influential, was the opinionated Union Democrat family I was raised in.

I’ll never forget my Grandpa, an old WWII Veteran who had survived in the Battle Of The Bulge and spent the rest of his life working everyday as a heavy equipment operator and farmer, coming down to our house with the paper. Grandpa was always disgusted with the groupthink nature of our society. He hated lying, greed, and selfishness. These qualities were all trademarks of the Reagan Era, and later under the Bush Regimes. As you can imagine, his opinions were not popular in the RED STATE of good ‘ole Nebraska, but he spoke his mind and spoke the truth.

It’s a similar story with my dad. He and my mom married as teenagers. They dropped out of school and he started working at the railroad at age 18. I have always found it ironic that my dad, with no formal education to speak of, is more politically informed then any social science professor I have ever met. The fact is I have NEVER seen ANYONE win a political argument with my dad.

Bottom line is this: Fuck the Christian Right…. They have fuct this country up worse then hard drugs. Fuck the “Grand Old Party” and all their pandering to the most ignorant WAL-MART dwelling, McDonalds eating, FOX NEWS morons. They are stealing OUR COUNTRY under the banner of “patriotism”. Don’t let them take our rights. Don’t trust the media. Don’t appeal to authority. It is our duty as AMERICANS to support descent and to question our government. Never be afraid to FIGHT for what you believe in. Never back down with threat of punishment or consequence.

NOISE, Motherfucker. NOISE.
I spent the first year and a half playing guitar not knowing how to tune the fuck’n thing or play a chord, and still really don’t know how to do either. I grew up playing my cheap guitar through my shitty amp, cranked to distortion. People have asked me over the years, “How did you come up with your tone”? It is a very simple answer; Lack of talent and training. You can hear the same quality in my playing as you can hear in the vocals: The sound of CONTEMPT.

Ben never took a drum lesson. He didn’t need to. He hears and feels music like NO ONE I HAVE EVER MET. The speed & precision he plays with comes from an obsessive-compulsive nature, compounded with countless hours of listening to music with his heart, not his ears. Without my brother’s talent and dedication to our music, THE MOTHERFUCK’N SAINTS may have just been “another hardcore band”. Because of his influence, we were fast and aggressive, without being monotonous and mundane.

Neither of us ever learned how to read a bit of music. All we ever knew is what we were brought up on. Speed. Volume. Rhythm. NOISE. And that begs the question; What the FUCK else do you need to know?

So go and listen…
For those of you who have been asking where you can get the old MFS albums, HERE IT IS. For those of you, who have heard OF the music but not yet listened TO the music, judge for yourself. This was NEVER meant to please. This was NEVER meant to garner money or success. This is, and always will be, music FOR the PEOPLE, BY the PEOPLE. NEVER giving an inch. NEVER letting popular opinion or commercial trends dictate the direction of this music. No playing politics. No ass kissing.

What you see and hear is what you get. To put this quit simply, this is a product of a couple brothers who started playing in sheds and barns in Southeast Nebraska because no one wanted teenagers playing our kind of music in their venue in Lincoln or Omaha.

The people who have stood by us, WE WILL NEVER FORGET YOU. We are, and will always be, so humbly grateful to those who have supported our music through thick and thin. For you new people: thanks for listening. TO YOU ALL: Spread the WORD. We don’t need PR people or major labels or agents or BULLSHIT. We just need all of YOU. Our friends, our family, our MUZIK.