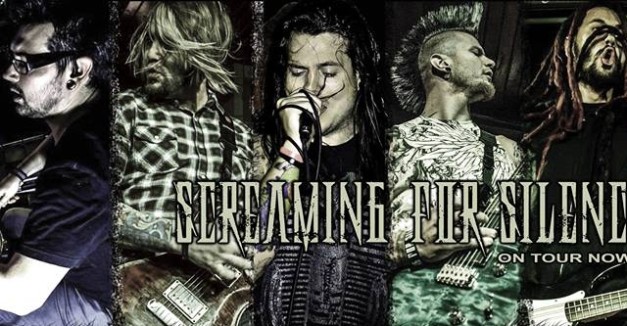 Cut from the same vain of acts like Smile Empty Soul, Papa Roach, Drowning Pool, Trapt and Powerman 5000, SCREAMING FOR SILENCE has collaborated with some of the Midwest’s most notorious rock producers, including Justin McCain (Emphatic) and producer/sound engineer Matt Sepanic (Slipknot, Dirty Little Rabbits, Murderdolls). At its core, the SCREAMING FOR SILENCE sound is intricate with ravaged vocals and cutting lyrics. The guys are currently working on their 2014 debut album in Hollywood, CA with producer Erik Ron (We Came As Romans, Motionless In White), incorporating recording/writing in to their grueling tour schedule.

That same dynamic and power fueled energy is only equaled live in concert. In a comparably short time, SCREAMING FOR SILENCE has shared the stage with diverse bands such 12 Stones, Taproot, Prospect Hill, Eye Empire and Another Lost Year. Their resume doesn’t end there – SCREAMING FOR SILENCE has primed the stage for BUSH, Stone Sour, Seether, Candelbox, and played on the 2008 Rock the Ink Festival (Providence, RI) with Godsmack, Killswitch Engage, All That Remains, Sevendust and more.

SCREAMING FOR SILENCE is now on tour with plans to return to the studio in April to finish their album. The Omaha-based outfit is primed for another round of hard edge tracks.