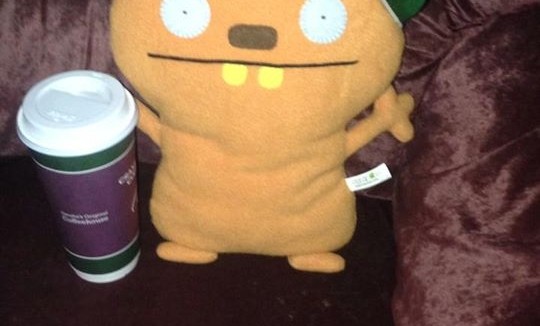 After three vodka spritzers and a shot of tequila, our rich aunt Susan finally built up enough courage to seduce world renowned composer Filippo Rosso at a fundraiser in Pittsburg for cows that can’t moo (apparently his music is deeply inspired by the sounds of nature, in particular, species of Bovinae). Shortly after breaking the ice with a farce story about how she milks her goats to his overtures, the relationship quickly accelerated into a feverish mounting session on the baby changing station in the women’s restroom. After the encounter Susan immediately left the conference center and spent the rest of her night on her stiff hotel bed with the legs in the air reading “What to Expect When You’re Expecting.” Sure enough, nine months later, a baby boy was born… it is said that when he emerged his cries rang perfectly in the key of C and the eyes of the hospital staff filled with tears of joy. As aunt Susan had hoped, Filippo Jr came into this world a six-pound nine-ounce musical prodigy. By the age of six his piano skills had surpassed those of his instructor and retired choral teacher Mr. Hamling. On the day of his last lesson he spit on his carpet on the way out. In junior high, the members of the band cowered in fear at the speed of which his fingers moved during his French horn solos. He had earned the nickname “laserfingers” among his peers as even the most delicate of his flicks or pokes were known to draw blood. Even the band director would not look Filippo directly in the eyes. After graduation he would go on to win every music scholarship and award known to man, and did so with great focus and complete disregard for the livelihoods of other human beings. Yes, in the cut throat world of music and entertainment, Filippo was a god-damn butcher. So being such a talent, you could understand our shock when he wanted to play in our band. His audition was spectacular in every sense of the word. I believe at point in the performance he was playing a compelling violin solo while keeping rhythm on a giant sized keyboard as made famous in the Tom Hanks move Big. Afterwards we rose to our feet clapping in disbelief. “Bravo, Bravo, Bravissimo!” we raved, “but you’re a total asshole.” The room fell silent and Filippo flipped the fuck out. Curses, insults, mockery filled our practice space. He even proved he could play the guitar with his balls better than I could with my hands. It was incredible. Pancho and the Contraband consists of two brothers, a lover, and a friend. We play music that we enjoy. Some say it’s great to listen to, others says it’s great to ignore. Our mothers will tell you it’s the best, especially after they’ve ingested 32 oz of malt liquor. We invite you to come to your own conclusions.