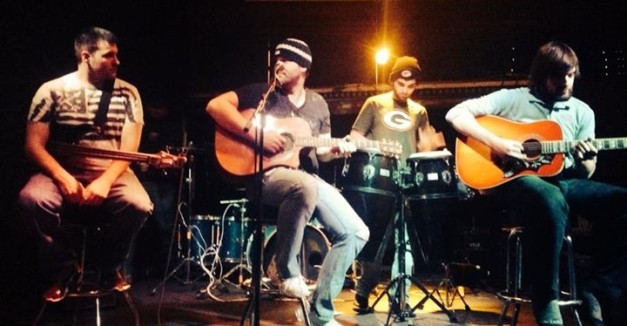 Naked Sunday is a 4 piece rock band from Omaha, NE. If you don’t know them yet, you will soon!

Based out of Omaha NE, Naked Sunday is a gritty, guitar-based rock band with a unique mix of acoustic styling’s and thoughtful melodies added in. With a wide range of influences ranging from blues, to rock, to even red dirt, everyone is sure to find something they will enjoy.
The band has found instant success playing locally at bars, parties, weddings, and fundraising events and has had several songs receive airplay on local, as well as some national, radio stations. They are in the process of recording their debut album, which should be available before the end of the year!
Band Members include Jason Mayer (vocals/rhythm guitar) Wyatt Mason (Lead Guitar) Ian Wenzel (Drums) and Neil Hults (Bass Guitar). All members have previous experience in the music industry. Jason is formerly of the band Chasing the Sun, Wyatt is formerly of the band Perdition, and Ian has played with several bands over the last 12 years, including The Dynarides, Park Street, and Basement Stuff . All of these bands have had local success playing around the Midwest for a combined 20 years of playing experience.
Some of the bands major influences are the Red Hot Chili Peppers, Three Doors Down, John Mayer, Pearl Jam, Led Zeppelin, Weezer, Neil Young, and Cross Canadian Ragweed. They mix all these influences well and have an undeniable uniqueness to them, which is rare in the music world today. Their live shows have also created some rumblings and are quickly gaining the reputation of “can’t miss.” With their high energy and crowd involvement fans leave raving about the experience.
Naked Sunday is a band on the rise, in their short few months as a band they’ve already accomplished feats most bands never do. Don't look for them to stop anytime soon!
More Stories