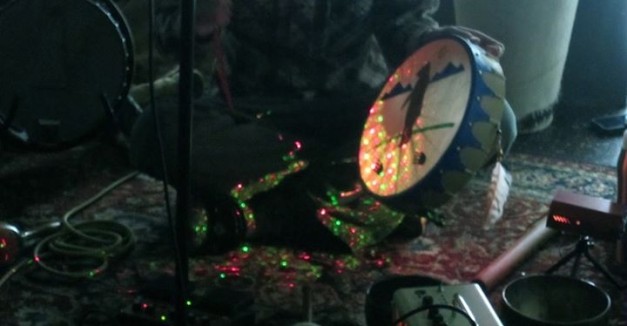 A one man band playing banjo, Tibetan singing bowls, gongs, a Navajo flute, tambourines, shakers and a hand drum with a contact mic through a loop pedal.

Experimental Loop Shamanism!
This is my means of self expression and sonic exploration through music filled with symbolic meanings and swirling visions.

Out of high school I was really into psychedelic pop from the 60's and 70's. From there I started getting into outlaw country with artist like Johnny Cash and Waylon Jennings. I would listen to old genres of country music through All Music. From there I started getting into honky tonk, listening to a lot of Hank Williams, Roger Miller, Ernest Tubb, Johnny Horton, Merle Haggard, Buck Owens and George Jones. Then it was listening to jug band music as well as yodeling country, listening to Jimmie Rogers and Wilf Carter from the 1930's. I was also listening to some early blues like Robert Johnson. Then for while I was listening to traditional native American music. Some current artist I like are David Bowie, David Byrne and Tom Waits.

For the past two years I've gone from one health problem to another. From 2011 to 2012 I was having digestive problems, I was also frequently nauseous with bad headaches and high blood pressure. I went on a gluten free diet and that seemed to help but I was still having digestive problems so I went dairy free also and that seemed to help even more, but I still wasn't 100%. I went to a holistic health class and they suggested going on a Paleo diet in order to reduce inflammation by avoiding difficult to digest foods like grains and starches and eating more easy to digest foods and introducing probiotics through fermented foods. After an few months I was able to resolve my digestive problems. While I was having digestive problems I was developing chronic back problems. I knew my work screen printing was bothering my back but I really enjoyed my job so I kept with it. I started to take Yoga classes in the fall and that seemed to help and then just before the holidays I was injured in mixed martial arts. I was sparring Ju Jitsu, I had my opponent in guard and he did a guard pass where he took my leg and threw it over my body. While I was stacked with my torso doubled over he dropped all of his weight on me and I heard a pop. From that I seemed to had broken my ribs and injured my back. As time went on my yoga instructor noticed I was having problems with the yoga chair pose so she encouraged me to see a physical therapist. I talked to my doctor and had an X-ray done and he said I had a vertebrate out of alignment so he gave me a referral to the Physical therapist. I'm glad I went, I've always had bad posture, but I wished I would have gone sooner. I wouldn't have had to have gone so long and it wouldn't have costs as much. After a month I was done and the physical therapist advised me to go to the chiropractor and get back massages as needed. So I did but I finely had to quit my job screen printing because it was to much. After finding a new job where I'm on the phone my back is finally healing. While I was going to the physical therapist in July I played an outdoor show out in the country. We were barbecuing food, we had apples and bananas on kebobs and my friend was talking to me and while I had my mouthful I tried to talk. I started choking on the food and I couldn't talk. My friend in the kitchen with me tried to give me the heimlich maneuver but he couldn't get it so I went outside and found my friend that is a nurse. She was able to get me to cough it out. In the process I think I coughed some of the food into my sinuses and it seemed like some of the food might have passed into my lungs, but I could breathe and talk so I thought I would be okay. My sinuses we sore for the next few days but I was making a point to cough out anything I could. After a couple of weeks and not getting any better I went to the doctor and he gave me some antibiotics. I took those but they didn't seem to be help so I tried a bunch of holistic remedies for a couple of weeks but I was still having problems so I went back to the doctor. At this time I was starting to experience chest pains when I breathe deeply. He gave me some more antibiotics but they didn't seem to be working so he gave me one of the strongest antibiotics. Then I found out that I still had insurance until the end of the month so I had an X-ray done and found out I had 3 broken ribs. I'm not even sure when it happened. My doctor thinks that the heimlich maneuver weakened my ribs and strength training agrivated it.