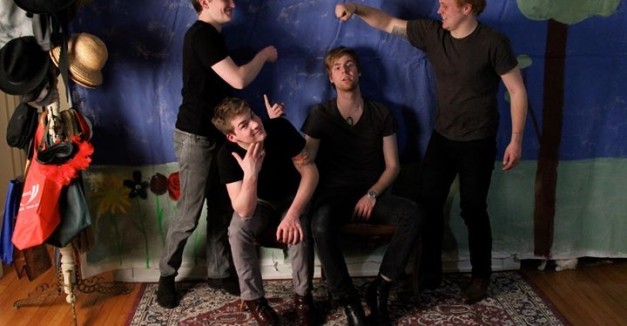 Lovers and Quarrels will be available Summer 2013. Stay tuned

Adam Roberts and brothers, Alexander and Nik Carlson, have been making music together since 2010, but with the release of Lovers and Quarrels they look to unleash their sounds out of the studio and back into the wild. Kwala Bee’s debut album was forged in a hand-built studio-garage in Omaha, and is the result of a long and arduous process of creativity, lunacy, and the consumption of gallons upon gallons of wine. After this initial process, Roberts travelled to Los Angeles where the album was mastered by the legendary Doug Sax, who has worked with the likes of The Who and Pink Floyd, just to name a few.

Roberts, the founder of Cornelius B. LLC, formed a band called Kwala with high-school friends Alexander Carlson (guitar & vocals) and Christopher Prinz (drums), as well as Nik Carlson (bass guitar) in 2010. When Prinz moved away from Omaha in 2011, Roberts recruited his father to play on their studio album, but eventually recruited Cameron Mayfield, another high school friend. Since originally forming they have recorded more than twenty songs together.

Kwala Bee does not seek to follow in the highly treaded boot prints of former Omaha heavyweights; Bright Eyes, Cursive, or The Faint. Though their style and ages may differ markedly from these predecessors, their dedication to the craft does not. Kwala Bee is young, talented, and willing to blaze a path that they can call their own.

Lovers and Quarrels is the result of Kwala Bee’s attempt to give voice to their collective talents into an organized and worthy, body of sound. Some say they are an amalgamation of The Beach Boys and Weezer but, as the name alludes, Kwala Bee is a whole different animal, escaping classification from biologists, critics, and everyday listeners.

Kwala Bee’s sounds can be unleashed for your own pleasure on any of these platforms: