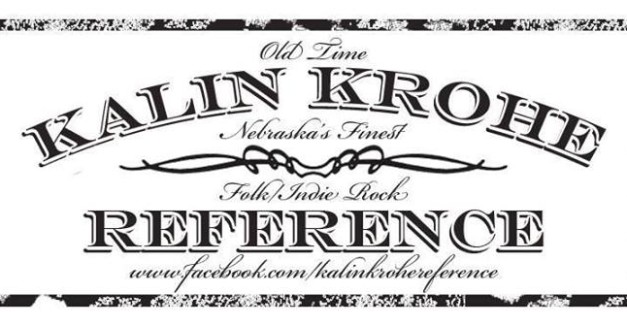 “Krohe puts his heart and soul into all his work, making it shine with authenticity in a day when the music industry has become over-saturated’- Redfield

Kalin Krohe, born August 23rd, 1986, is an American singer-songwriter, poet and radio broadcaster. His songwriting is a staple of Nebraska and South Dakota, the two places he has called home. Krohe's celebrated work dates from the turn of the last decade, when he was an informal chronicler and reluctant figurehead of social unrest. A number of his early songs, such as "Wind Swept Love", "More Than Gold", and "For Thoreau," produced by Mike Dresch of Cathouse Studios(Spill Canvas, Irony), declared Krohe to be one of the finest songwriters in Western Nebraska's panhandle, performing to increasingly larger audiences by the night.

In 2007, leaving the cornfields of Nebraska for the Corn Palace of South Dakota, Krohe revolutionized the perceptions of his musical limits with the six-minute single, "Honey Whiskey," an infectious, catchy-as-hell ode to growing up in small-town America. The full band production, complete with drums, bass, and a wailing harmonica, pointed to a new direction for the young balladeer turned rocker. Since then Krohe returned to his roots in search of self, truth, Love, dreams, and the unknown paved path. Currently recording his second album, "Sunshine in the Night", in the Scottsbluff area at Double Four Studios.

A scholar of both music and life, Krohe's music now incorporates a kaleidoscope of genres, exploring distinct traditions from folk to blues, country to gospel, and rock to rockabilly, while his lyrics carry social, philosophic and literary-tinged themes, transcending the content of conventional pop music to appeal to a broad range of fans, from the burgeoning counterculture of underground America to followers of beloved bands like Bright Eyes, Pink Floyd, Neutral Milk Hotel, Death Cab For Cutie, John Lennon, and Elliott Smith.

Kalin Krohe is an artist to watch in the 2010's. Whether he's performing solo, or scouting for up-and-coming talent as president of Krofield Records, Krohe puts his heart and soul into all his work, making it shine with authenticity in a day when the music industry has become over-saturated with mediocrity. Krohe, however, gives us a reason to believe that things are changing for the better. - Martin, Redfield