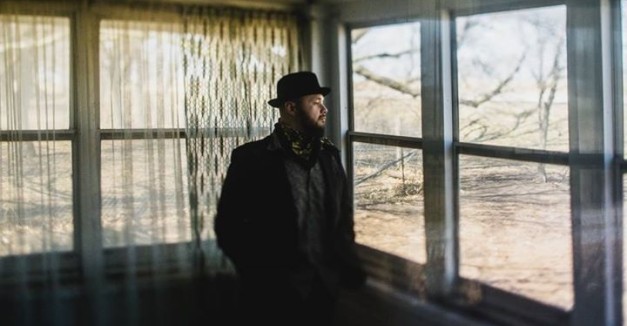 Hector Anchondo doesn’t just play the blues— he lives and breathes the blues. At 16-years-old, the budding musician picked up his first guitar and never looked back. He began an instant love affair with the instrument, especially Fenders. Born in Omaha, but raised seven miles outside of Salem, Missouri, Anchondo was able to take advantage of the tranquil farm life and learn guitar at a steady pace. He was drawn to those artists who played Fender Stratocasters like Jimi Hendrix, Stevie Ray Vaughn and Eric Clapton, but also respected the country greats such as Johnny Cash and Hank Williams Sr. As he got older, his propensity for music only intensified. After playing countless shows at family gatherings and hole-in-the-wall dive bars, Anchondo made the move back to Omaha, Nebraska in 2000. His first official recording, Rookies of the Year, was with his first band, Anchondo, and featured more energetic, Latin-influenced grooves. Recorded by the infamous A.J. Mogis of Presto! Studios (and later Saddle Creek Records), the album funded any touring for the next few years. With a home base in Omaha, it made traveling much easier.

“At the time there was really huge radio support, area wide album distribution, and a huge local music support that I've never come across in any other city I've ever traveled to,” Anchondo recalls. “Omaha is still a great city to get your legs, but 10 years ago it was unmatched. Omaha has played a huge roll in propelling me forward and I owe a lot to this city.”

In 2002, Anchondo and cousin George Keele released an acoustic rock album, Somewhere in Middle America, and followed up with 2004’s The Audience is Waiting and an EP, 2006’s North of the Border. After years of touring and living on Ramen Noodles, Kings of Nowhere was released in 2008. At the time, Anchondo had gained significant amounts of traction and even without promotion, would sell out shows. However, once the economy crashed, people suddenly stopped going to shows so around 2010, Anchondo made the brave decision to take the solo route. Only this time, his focus was on the blues, which didn’t happen by accident. Friend Tim Convy and owner of the St. Louis-based label, Red Bird Records, contacted Anchondo about recording a blues album. He jumped at the opportunity. In 2012, he released the Kickin’ Up Dust EP and hasn’t looked back. Sharing the stage with notable artists such as Mato Nanji of Indiginous, Magic Slim, Royal Southern Brotherhood, Hamilton Loomis, and Coco Montoya, and getting private guitar lessons from James Brown’s guitarist Damen Wood, gave Anchondo the confidence to pursue his dream. He’s currently writing material for his next album and plans on releasing an EP in 2014. With shows booked until the end of the year, Anchondo is on his way to becoming an established blues vet, and it won’t be long before he’s up there with his heroes.

“I’ve been actively working on guitar to get to the point where I could hang with Jimi or Stevie,” he says. “I want to be able to take the stage with any guitar great and be able to hold my own. It's things like that that keep me pushing to play better, faster and with style. I knew at a young age that I loved everything about music and I want to do it professionally for the rest of my life.”

The other boys in the band!

Bass: Carl Brown – Has been in the Omaha/Council Bluffs music scene since his grade school days, where he played in Jazz band. He played in the band Anchondo with Hector as well, a well known Latin influenced band in the midwest. He also played in several other bands that did very well around the area. He received guitar lessons from local guitar great Joe Legit and also James Brown’s guitarist Damen Wood. He has been playing with Hector Anchondo from 2009 to present. Carl is a true lover of the music craft and you can tell as you watch him lay down the grooves on stage.
More Stories