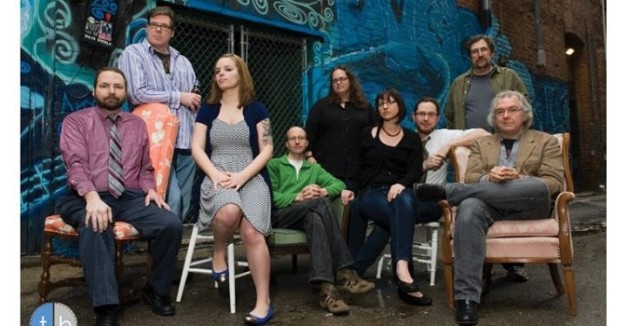 Floating Opera is a music collective based in Lincoln, Nebraska. Since the early 1990s, over 30 musicians have recorded with Floating Opera, with backgrounds varying from classical to punk. The instrumentation includes violin, cello, keyboards, trumpet, oboe, saxophone, accordion, flute, electric and acoustic guitar, electric and acoustic bass and drums, all framing stunning female vocals. Among the core members of Floating Opera are former members of The Millions and Mercy Rule, two excellent bands who released major label records in the ’90s, and former members of the New York band Liars. “Burning Lighthouse” (2003) is Floating Opera’s fourth release, after a self-titled debut cassette, the CD “Everybody’s Somebody’s Monster” (on the label ismist), and the EP “It’s Not Easy Listening Anymore” (also on ismist). These recordings received strong reviews, which can be found on our website www.floatingopera.com, along with music, lyrics, pictures and a mailing list signup. “Burning Lighthouse” was nominated for Lincoln radio station KZUM’s “Album of the Year” in both 2003 and 2004. In the late 90’s we did a half hour live performance for a Nebraska Public Television, and our music will be featured in the upcoming film “Every Time I Kill”, the final (posthumous) film from legendary cult filmmaker Doris Wishman. Most of the songs are written by Charles Lieurance and Richard Rebarber, and Richard also produces the records.