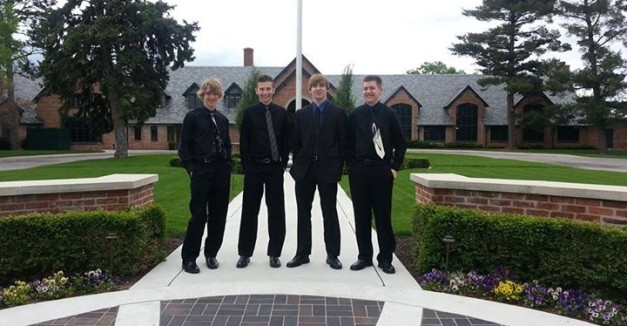 Schylar Junginger (Saxophone). Skye, 16, is a junior at Logan View High School in Hooper, Nebraska, who has been playing the tenor, baritone, and soprano saxophones for over six years. He plays in the high school jazz, marching, concert, and pep bands. In addition, he is a student in the BluesEd program (affiliated with the Omaha Blues Society) and plays in the youth blues band, Us & Them. He is also a member of UNO’s Metro Area Youth Jazz Orchestra (MAYJO) and Cathedral Arts Project (CAP) Jazz program. In 2012, he played in All State Jazz Band as well as in several local venues including The Summer Arts Festival, Aksarben Blues Fest, Playing with Fire and Slattery Vintage Estates.

Ed Berry (Piano). Ed, 17, is a senior at Elkhorn South High School who has been playing classical piano for over 10 years and jazz/blues for over five years. Besides playing in his high school jazz, pep, marching, and concert bands as a pianist/keyboardist, he also plays other percussion (including mallets), and plays tenor sax in concert band. He has received awards including the “Outstanding Performance Award for Instrumental Solo” at the NSAA district music festival and was selected this year for All-State Band. Ed is a member of MAYJO, Mojo Bag (a youth blues band affiliated with the Blues Ed program), and a CAP Jazz ensemble. He has played at numerous venues including “The Morning Blend” television show, Playing with Fire, and The Zoo Bar.

David Bredthauer (Bass). David, 15, is a ninth grader at Brownell Talbot. He has played the bass guitar and upright bass for five years. He also plays the guitar, drums, ocarina, and piano. He is a member of the Blues Society BluesEd program and plays in the band, Us & Them. He has also performed through the Cathedral Arts Jazz project, UNO’s summer jazz camp, the Dundee Presbyterian Church CRASH youth band, and the Brownell Pep Band and All-Strings Orchestra. David has performed with the youth blues band, Us & Them, at various local venues including McKenna’s, Playing with Fire, Aksarben Village, Sumtur Amphitheater, and Slattery Vintage Estates.

Josh DeCoster (Drums). Josh, 19, has been playing drums since he was six years old. He graduated from Papillion South High School in 2013 where he was a Student Ambassador and a member of the Leadership Academy. He taught music, filmmaking, and film editing to the High Ability Learners in the Papillion School District as part of his internship through the Leadership Academy and also teaches private drum lessons. Josh played drums for several bands via the BluesEd and Cathedral Arts programs for the past four years and now plays professionally in the Omaha area. His list of venues includes The Slowdown, Playing with Fire, The Zoo Bar, and radio stations 89.7 and CD105.9. Josh is a freshman at the University of Nebraska at Omaha.