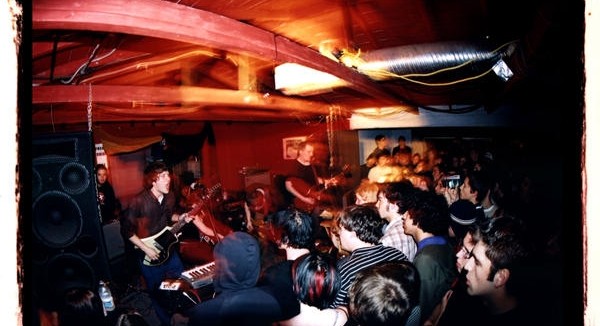 Read the playbill while listening to the new record – http://www.cursivearmy.com/i-am-gemini-playbill/

Cursive is the longtime trio of Tim Kasher (vocals, guitar), Matt Maginn (bass), and Ted Stevens (guitar, vocals), with Patrick Newbery (keys) and Cully Symington (drums). I Am Gemini (out February 21, 2012), the band's seventh LP, is the follow-up to 2009's critically praised Mama, I'm Swollen, which caught the attention of publications including Alternative Press, Billboard, Playboy, Rolling Stone, and Time Out New York, among others, and earned the band their network television debut on The Late Show with David Letterman. Cursive has released six full-length albums - including the heralded Cursive's Domestica (2000), The Ugly Organ (2003), and Happy Hollow (2006) - two EPs, a disc of rarities, and numerous singles since the band's 1995 inception.

The band is also known for their vital, magnetic live show, earning rave reviews from outlets including the Cleveland Scene's C-Note music blog ("[Tim Kasher's] effect on the crowd was chilling last night... Cursive was focused and on-spot, composed and gripping"), Nuvo Weekly ("...the five-piece slashed through a near-perfect set of songs from their last nine years of albums"), and the Orlando Sentinel's Soundboard blog ("...the band still knows how to rock on stage... [Cursive] thrashed away with an abandon that heightened the passion of Kasher's dense, emotionally charged wordplay.").

I Am Gemini is the surreal and powerful musical tale of Cassius and Pollock, twin brothers separated at birth. One good and one evil, their unexpected reunion in a house that is not a home ignites a classic struggle for the soul, played out with a cast of supporting characters that includes a chorus of angels and devils, and twin sisters conjoined at the head.

Recorded in the summer/fall of 2011 at Omaha, NE's ARC Studios and mixed at Red Room in Seattle, WA with producer Matt Bayles (Mastodon, Minus The Bear, Isis), I Am Gemini marks the first time front man Tim Kasher, holding the completed story already in mind, wrote album lyrics in a linear fashion, in order, from song 1 to song 13. The result is thirteen singularly cohesive song chapters that blend effortlessly into one unique narrative. The moody and playfully sinister I Am Gemini is Cursive's musically heaviest in years, with alternately muscular and angular guitars, pounding drums and driving bass. From the eerie introductory sounds of epic barnstormer "This House Alive" and the irresistibly catchy, insistent "The Sun and Moon", to the searing "Double Dead" and the split personality prog-pop of "Twin Dragon/Hello Skeleton", to the roaring, mournful closing track "Eulogy for No Name", the album is a dynamic, mind-bending, and imaginative ride.