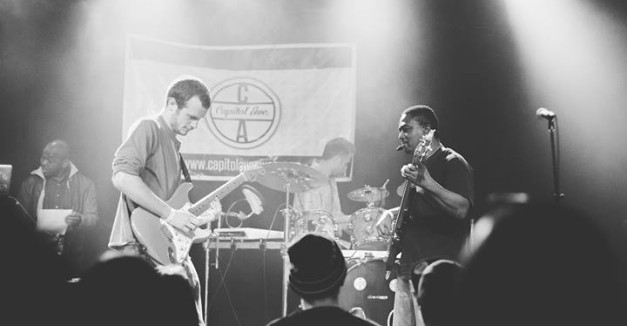 Capitol Ave isn’t just another band, act, or musical group. Hailing from Omaha, Nebraska, Capitol Ave. is a movement…it is the collective creative force of three artists striving to tell their story. Although Capitol Ave. was formally founded in 2012, the group’s origins run much deeper. Rapper and lead vocalist Ben “Benny Salz” Salzinger was introduced to aspiring producer and multi-instrumentalist Zach Fuller while attending Creighton University in 2008. The duo immediately began recording primarily hip-hop and rap music, releasing a series of three demo tapes between 2008 and 2011. Drawing from a wide array of influences, ranging from alternative rock to dubstep, the duo expanded their musical horizons and independently released their debut mixtape “Inside Out” in 2011. The success of this release not only provided Fuller and Salzinger a solid following within the Omaha music community, but also introduced them to bassist Durwin Pace. Pace was the final ingredient needed for the group, and thus Capitol Ave. was officially formed. In 2012, Fuller moved from Omaha to begin work on a Ph.D. in molecular evolution at Penn State University. Meanwhile, Pace worked night shifts at a local shipping company, while Salzinger worked in advertising for an Omaha based car dealership, yet this did not put a halt to the group’s ambitions or aspirations. Starting in the fall of 2012, Capitol Ave. began work on their debut album “Put on Hold”, all while managing different schedules and living in different time zones. Capitol Ave is not bound by conventional genres or musical boundaries. The group’s only goal is to write music that resonates with their fans and stay true to themselves.