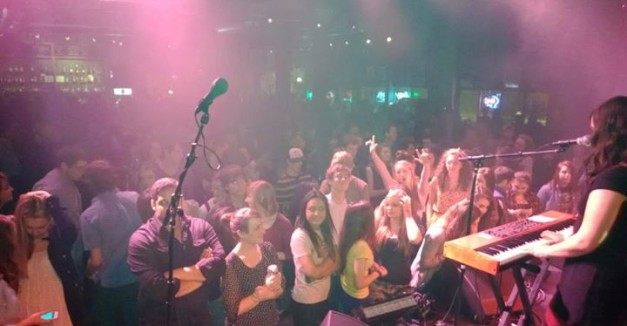 “Bluebirds are symbolic of rebirth and second chances,” says Marta Fiedler during the opening interview sequence of Blue Bird's live video of the song “Perfect Day”, shot by stalwart Omaha film crew Ingrained. Blue Bird has become, in a way, that rebirth for Fiedler. After her first project, Lincoln, Nebraska's Hymn From the Hurricane, called it quits she gave up on writing and performing music completely for a few years. It didn't take long, however, for new songs to begin taking over her consciousness. By late 2009 Fiedler found herself with a large batch of songs and preparing to enter ARC Studios in Omaha to record with producer/engineer AJ Mogis who has worked with such artists as Cursive, The Get Up Kids, The Faint, Rilo Kiley, Pete Yorn, etc. Those sessions turned into 2010's Metamorphosis EP and the more recently (June 2012) released eponymous LP.

If 2009 was the rebirth, then 2010 became the second chance. In August of that year Fiedler assembled a band to begin performing live shows. The roster has seen a few changes since then and currently consists of Fiedler (lead vocals, piano, acoustic guitar), Vince Giambattista (guitar), Matt McClure (bass) and Rob Mathews (drums). Rebecca Smith (synths/vocals) joined the group mid-2013 to solidify the current lineup.

The summers of both 2011 and 2012 took Blue Bird and their sounds of intimate instrumentation, soaring vocals, and confessional lyrics on tours of the Midwest and East Coast that brought them to the cities of New York, Chicago, Nashville, Minneapolis, Kansas City, Louisville, Boston, Philadelphia, Pittsburgh and more. These shows have steadily broadened their fan base, all the while drawing comparisons to such acts as Jenny Lewis, She & Him, Loretta Lynn, pre-hits Bangles, Feist, etc. Also in 2011 Blue Bird was nominated for an Omaha Entertainment & Arts Award for “Best Indie Band”. In the early months of 2012 the band was handpicked by Sonic Bids and maurice's Clothing Stores to compete against 3 other acts to land a spot at a SXSW showcase.

Blue Bird is currently continuing to play in their hometown of Omaha, Nebraska as well as regionally as they begin writing material for their next release and subsequent tours. As of late the band has begun incorporating more electronic elements into their sound, while still keeping the core influences.